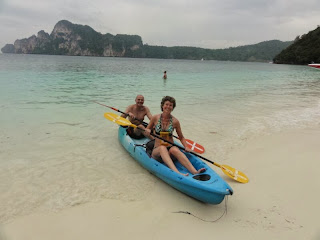 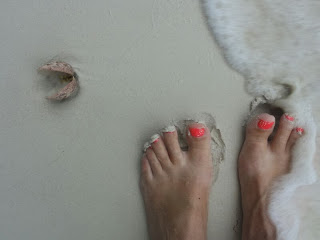 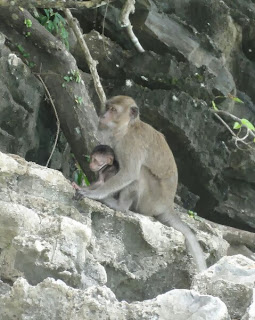 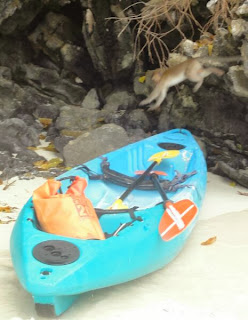 Today is my birthday and we are celebrating with a kayaking trip to Monkey Beach.
I am frightened of monkeys, but I thought I could always jump in the sea to avoid them if necessary.
All went well initially and we landed with no problems. The beach was almost deserted and there was no sign of any monkeys. We left the kayak on the sand and went snorkeling.
There were loads of brightly coloured fish and some cute pink and grey ones looked me straight in the eyes and zoomed in towards my face mask. They shot away at the last second and I think they may have been expecting some food from us.
The water was really clear, and we had a fantastic time. The tide came in very quickly so we had to pull the kayak further up the beach. I was out snorkeling when it nearly floated away so Darren launched it and rowed over to give me a drink. I didn't know he was there so I head butted the boat, but it was a lovely thought.
Gradually the beach filled up with tourists, and then suddenly the monkeys appeared. They jumped down off the rocks and on to our kayak, but fortunately they kept going and ran over to the tourists rather than helping themselves to our things.
They were actually really sweet and did not seem too aggressive, but I stayed in the water just to be on the safe side.