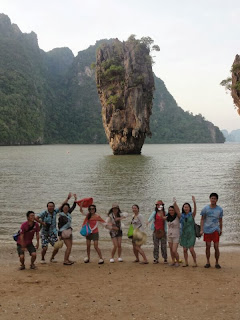 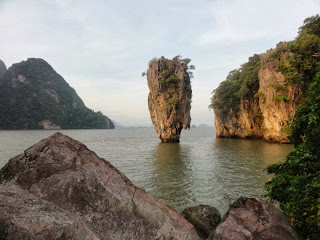 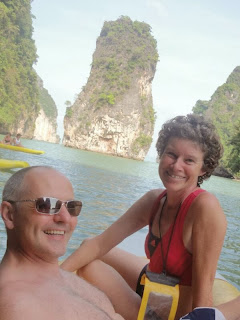 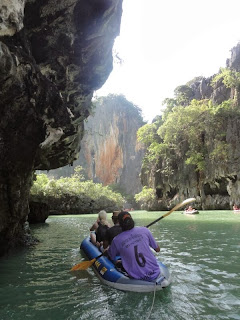 Today we went on a very long boat trip and the main highlight was James Bond Island. In 1974 Roger Moore and Britt Ekland starred in 'The man with the golden gun', and Salamander  (the baddie) had a house on this island.
We arrived just before sunset and we were the only boat there, as everyone else was long gone. The island is usually very busy, but we had it all to ourselves so everyone spent time posing for silly shots.
We also had a lovely time at Hong Island which has a beautiful lagoon in the middle of it. We thought we would be kayaking around it, but when we got there, the kayak came complete with a driver. All we had to do was sit there and he whizzed us around.
Twice we had to lie completely flat and he took us in to really low caves and through tiny gaps.
It was a fantastic day, but the downside of staying in Phuket is that it is very big and busy, so it was a 90 minute drive each way from our hotel to the pier. Whereas in Ao Nang, Koh Lanta and Koh Phi Phi it never took more than five minutes.