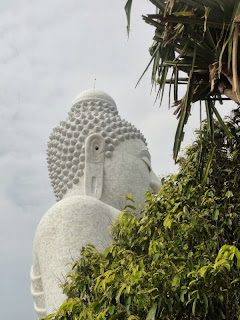 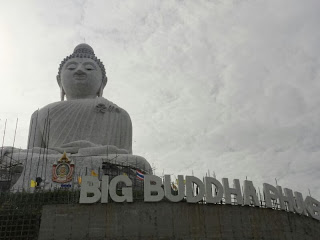 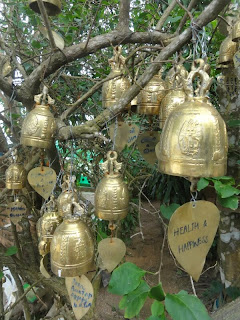 You win some, you lose some.
Today we went on a city tour of Phuket, and the organisers obviously had trouble putting enough things together for us to see.
We started with a couple of viewpoints, but the weather was pretty hazy. We then went to see a baby elephant that was on a very short chain and looked quite distressed - it was upsetting to see. We also saw an orchid farm which had only one small flower in the whole place.
A cashew nut factory was interesting, but consisted of a lady at the door with a fancy nut cracker and a massive shop behind her. There were loads of different cashew nut based samples and Darren was pleased as he tried absolutely everything.
The Chinese old town was just a drive through, but the best thing was the Big Buddha on top of one of the highest hills on the island. It was only half finished, but it was a very religious place with lots of monks who were chanting loudly all the time we were there.
I also liked all of the little bells with messages on that were hanging from sacred trees.