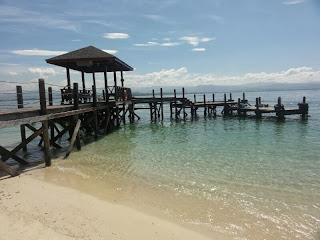 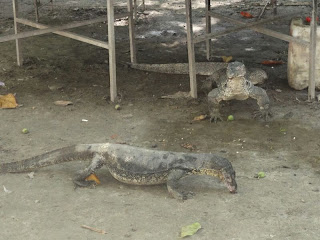 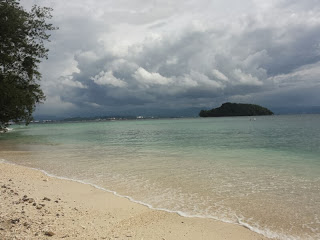 Such a good day yesterday that we decided to go back for more of the same today.
We arrived early again and were dropped off at the jetty, which was just about deserted.
We had a lovely morning snorkeling around and I was surrounded twice by huge shoals of colourful fish. They are really inquisitive and come very close, but I am a little bit wary, as I forgot to tell you that yesterday something tried to take a chunk out of my leg!
It made me jump and I span around quickly, but didn't get to see what did it. My leg was bleeding when I got out of the water and now I have a little mouth shaped cut to prove it.
I also didn't tell you about the giant monitor lizards that were marching around the barbecue pit area once lunch had been cooked. Pretty scary don't you think?
Finally, our boatman came to collect us early to bring us back to the mainland today as a storm was brewing.
The wind was blowing strongly and the water was rough as we shot along at top speed. Fortunately we sat at the back near the driver as we sat at the front yesterday and although it was great fun, each time we took off and then landed again felt as if we were hitting a concrete block.
This time it was really extreme and two Russian tourists bounced along the whole journey.  When we were nearly home our driver, who was very cheerful and a bit of a joker, drove the boat at full speed towards the shore. At the last second he turned the boat so that we were tipping up at a 45 degree angle before stopping dead just in front of a concrete wall. He did laugh when the Russian lady screamed!