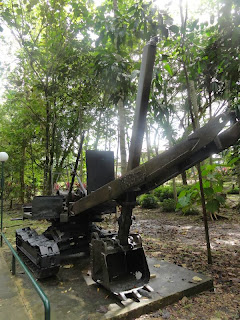 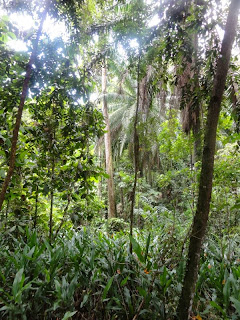 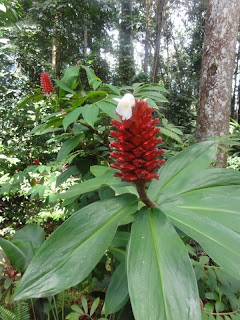 Caught a bus to the eight mile marker out of town to the Memorial Park. It is now a mixture of garden and jungle and is on the site of a prisoner of war camp from WW2.
The majority of prisoners were Australian, but there were also many Britons at the camp. The Park is dedicated to the 2,428 prisoners who lost their lives building an airstrip for the Japanese.
It was a very peaceful place and we followed a path around the site reading the information notices.
The digger was initially used by the prisoners, but then one night an Australian sabotaged it and it has not moved since.
There was also a nice building with more info. Once inside a friendly local man came over and asked if he could take my photo with his children. We started with a group shot, then individual pictures with each of the four kids, then different combinations of children including me carrying the youngest, then some of the kids and Darren, finally a few of both of us and him.
He kept saying thank you and then shaking our hands in really complicated high five type moves, and then coming back for yet more photos.