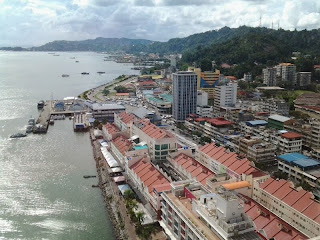 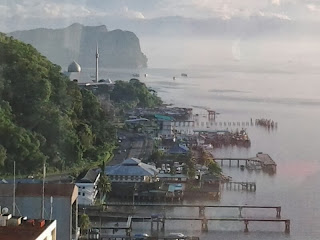 This morning we flew from KK to Sandakan as the roads are very slow and twisting, and the flights are frequent and cheap.
After the terrible hotels in Hong Kong, and with Christmas on the horizon, we decided to for somewhere nice here. Darren found a great deal at the only international hotel - the Sheraton - and booked it over the Internet.
Upon arrival we found there had been a mix up and they had charged us twice. They were not keen to give us a refund, and as they were obviously not full, they kept offering us upgrades and extras instead.
We were totally against it at first, which is probably why they eventually offered us so much, but now we are in an Executive Class room. It is as big as our last apartment in Nottingham with great sea views. Initially we booked for a Standard room only, but now we have fruits and cakes delivered daily, we can use the executive lounge which has free cappuccinos, soft drinks and nibbles all day, then wine and cocktails from 5.30 until 7 daily. We also have breakfast included and a large credit that we are going to spend on Christmas dinner.
All this is still cheaper than the tiny room in Hong Kong. Although, to be fair, HK is a major city and Sandakan is on the east coast of Borneo and pretty remote.
We have a new and unexpected problem now - how are we going to tear ourselves away from this place to see the sights?