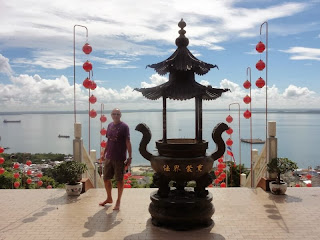 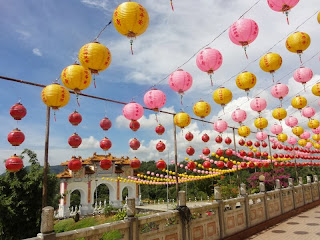 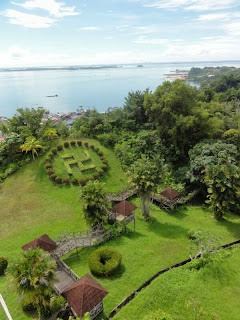 Caught a local bus to this beautiful temple which is on a hill overlooking the sea about 4k from our hotel. It was a short walk from the bus stop but uphill on the final section, and I don't think I have ever been anywhere that is so hot and humid.
Fortunately, the temple area itself was a little breezy and it was nice and cool inside.
The gardens surrounding it were beautifully kept, but there is a large symbol made from box hedging that is initially very disturbing. The same symbol is also all over the temple itself.
There is a key difference between the Buddhist symbol and the Nazi swastika. It is that Buddhists use the left facing from and the Nazi swastika is right facing and usually at a 45 degree angle.
In Bhuddhism it is a sign of well being and good fortune.