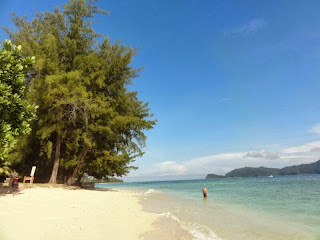 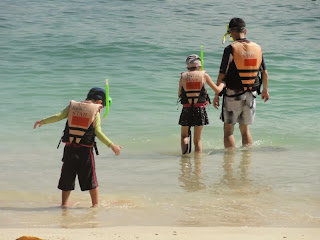 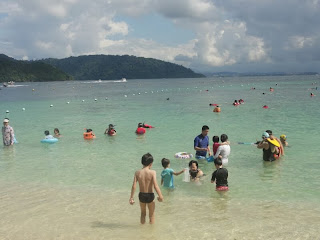 Good weather forecast for today so we went on a speedboat trip to Mamutic and Sapi Islands, which are just off the coast of Kota Kinabalu.
We got lucky and caught one of the first, and fastest boats. The beach was almost deserted and Darren was just about the first person into the sea.
Within an hour or two it had filled up with tourists, mainly Malaysian and Chinese, I think. It was very entertaining watching them as although the sea was very calm and the beach gently sloping, they nearly all wore life jackets, and often arm bands and rubber rings too.
Someone took the emergency lifebelts from the beach and they floated around for the day, just to be ready for any emergency.
Once in the water, most of the tourists stood about waist deep and made no attempt to swim.
Most of them wore snorkels and masks, but rarely put their face underwater. I was sitting in the shade under a tree when one couple strolled past wearing the full kit, trying to have a conversation through their snorkel mouthpieces.
After lunch we sat next to a young couple who decided to go for a swim. The guy wore a life jacket, snorkel and mask and I watched them wade in. About five minutes later I heard a commotion and shouting. Suddenly a life guard shot across the sand, into a canoe and paddled out to someone in trouble. The person clung on to the side of the canoe and was brought back to the shore.
Of course, it was our neighbour and he looked very sheepish when he eventually returned. His girlfriend told me that suddenly a lot of water had poured into his mask and then his life jacket stopped working.