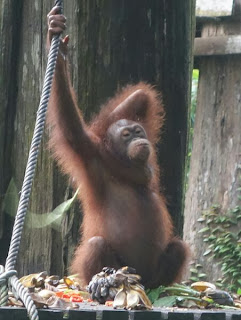 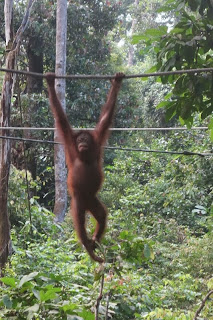 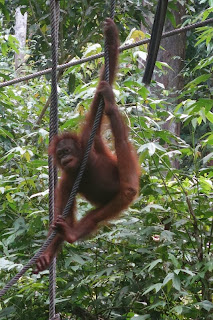 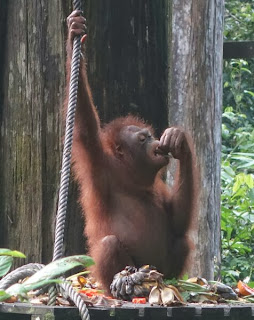 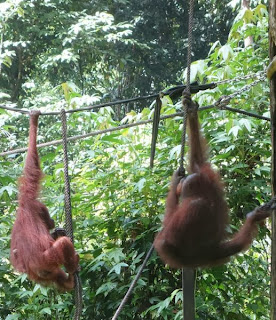 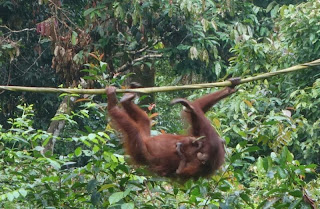 Caught a bus to the famous Sepilok Orangutan Rehabilitation Centre this morning. The centre was set up in 1964 and takes in and cares for orphaned and injured orangutans. The young ones are cared for in a nursery where they are taught jungle skills such as finding food, building nests and even climbing. It is not possible to see this area, but as they get older they are gradually introduced and released into the local rainforest.
The Centre has a feeding area and twice a day tourists are allowed to walk to a viewing area, and food is left out on a platform a few feet away.
It is up to the orangutans if they come to the platform and some that are released never return, but others visit regularly.
We stayed for both morning and afternoon feeds. In the morning an adult female and her own baby arrived, together with a juvenile male. (see pics 5 and 6). They sat with their backs to us, ate everything they were given, then climbed the ropes and disappeared.
In the afternoon we got there early, just as a young female was climbing down from the trees. One of staff told us that she is one of three who are in the middle of the release programme. She can still return overnight to the Centre, but is often now making a nest to sleep in and staying out all night.
She was really cute and put on a good show climbing gracefully down to the platform.
No other orangutans arrived so she ate leisurely then ambled away, striking quite a few poses as she went.