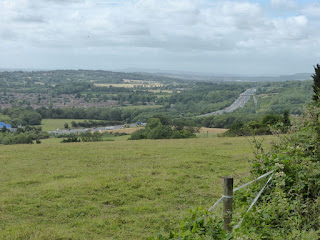 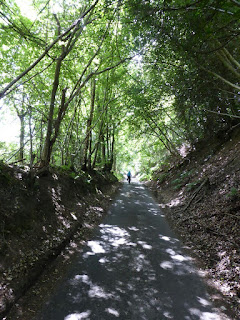 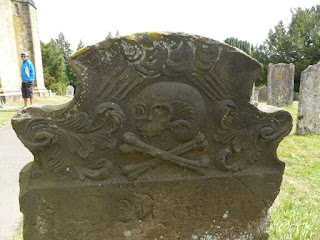 We are back in the South East visiting friends and family, and enjoying cycling between them.
This afternoon we followed quiet roads and hilly tracks over the M25 and through the beautiful village of Godstone.
I was taking photos of local scenes when a cyclist passing  told us to visit the pirate's grave in the church graveyard.
It sounded interesting as we were nowhere near the sea, and had no idea what a pirates grave would look like.
It took us a while to find him, but there was no mistaking it when we did.
John Trenchman ran away to sea when he was 12 and joined the famous Captain Morgan in the Caribbean. Eventually he retired from the sea and started smuggling contraband from the south coast up to Croydon.  In 1687 he was involved in a fights with Customs Officers and was shot and died near to Godstone.
The local people buried him in an unmarked grave at the edge of the cemetary, but he started haunting the area, so the local people exhumed him, gave him a full Christian service and reburied him right next to the church door.
He had a headstone with a skull and crossbones on it, and he must have been very pleased, as he has not caused any trouble since.