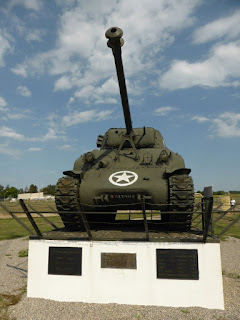 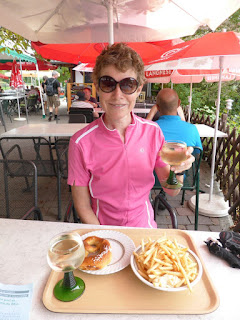 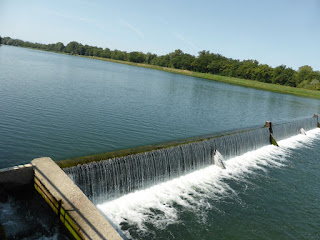 The Maginot Line was built by the French along their border during the 1920's and 30's. It was a huge line of bunkers and military defences that stretched from the river Rhine next to Germany and up to the Belgian border near the north sea. It left an opening at the top, but Belgium was a neutral country so France thought that was acceptable.
The defences were supposed to protect them from any future invasion by the Germans, and would have worked fantastically well if the next war was fought in the same way as the First World War.
Unfortunately for the French, when Germany decided to invade in the Second World War, they simply went straight through Belgium, round the top and on to Paris in less than six weeks.
We learned all about the Line when we cycled past the end bunker which has now been turned into a museum.
We had a lovely day cycling along the French side of the Rhine, then crossing over a bridge into Germany to cycle back down the other side.
We came across a little cafe and enjoyed a not very healthy lunch of chips, pretzels and two large glasses of German wine.