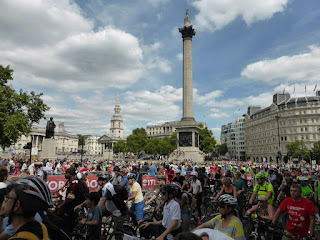 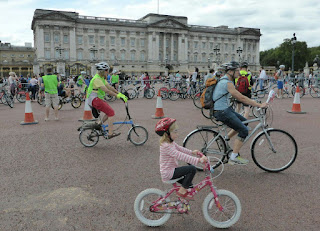 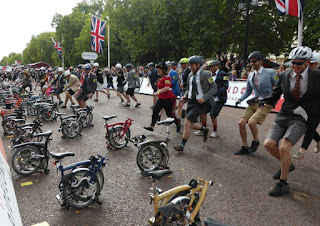 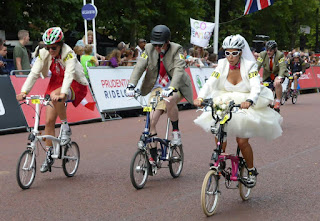 Today we are back in London and went cycling in the city centre. It was the Prudential Ridelondon event and lots of roads were closed all day so that cyclists could have the roads all to themselves.
It was completely mad with thousands and thousands of cyclists packing the streets. I heard one of the staff say that there was about 11,500 cyclists per mile, and the course was eight and a half miles long!  That's about 100,000 people.
There was a massive bottleneck at Trafalgar Square so we decided to hop off the course and have a pub lunch while the crush went down. It was slightly quieter when we returned, and it gave me a chance to be able to look at the views, instead of watching to make sure that I didn't run over any tiny children.
It did feel very strange cruising past Buckingham Palace and then down the Mall.
We also stayed to watch Brompton bike World Championships around St James's Park. The folding bikes were on one side of the road and when the whistle blew, the competitors had to run across the road, unfold their bike and then cycle off.
Most people were pretty quick off the mark, but one lady took ages and struggled to get her huge yellow handbag onto the front of her bike. She didn't seem worried, and the crowd cheered her along as she slowly cycled off on her own.
Jacket and ties are compulsory for the men and lots of ladies wore them as well, but one lady decided to wear a wedding dress. Unfortunately, her chain came off right in front of us, but she valiantly got it back on very quickly and whizzed off after her friends.
She had caught them up by the next lap and I hope that she didn't get too much oil on her lovely dress.
We couldn't see the finish line, but apparently the guy who won it last year won again by a short wheel.