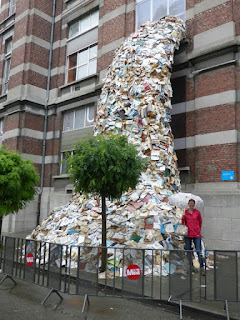 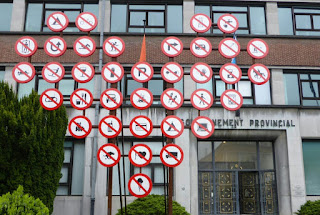 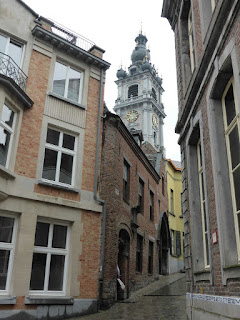 There was so much to see around Lens, our last campsite, but this morning it was hidden under dark clouds and constant heavy rain. We decided to change our plans and have a shopping/driving day instead - so here we are in Belgium.
At first glance it is just like France as it is very wet and everyone speaks French.
We took a walk around the town in the early evening, following a map that we were given at our campsite. Lots of other people had the same idea and we kept bumping into families who were trying to find the 15 urban installations that were scattered around the town.
To be honest, some were a bit rubbish and we couldn't find a couple, but my favourite was called 'Biografias'. Basically it was a huge avalanche of books out of a first floor window.
Another not quite so successful one was large stuffed monkeys hanging high up in a tree, but as they were soaking wet they just looked very sad. Finally, 'City says no' was a heart shape made of road signs telling you things that you couldn't do. It was probably placed outside the government office on purpose.
The town also has some lovely buildings and we definitely haven't seen the best of it yet.