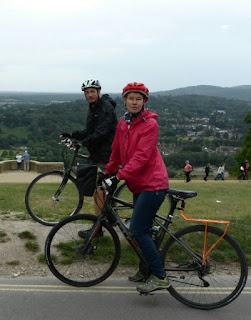 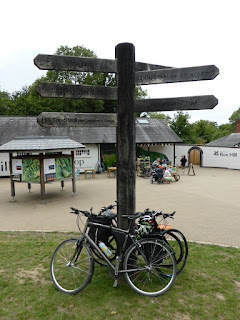 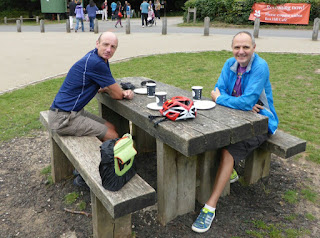 We set off this morning on a bike ride with our friend Dave. Unfortunately, he is a fitter and faster than us two, so we had a bit of a job on our hands.
Our first test was on Horse Hill, and I dropped off the back of the peloton, despite my best efforts to keep in contact.
In the 2012 Olympics the men's Road Race climbed Box Hill ten times, but we were hoping to just get to the top.
Actually, it was quite an easy route, with smooth tarmac and a steady slope.
We finished as expected, Dave first, Daz second and me third.
Darren had set his Strava and many, many people had done so before him. He finished in 28,000 and something place out of a total of about 46,000.
We all enjoyed it so much that we decided to do the Road Race circuit and headed up the hill again.
As expected I was quickly dropped, but on rounding a corner I thought I saw Darren ahead of me and I started catching him.  I raced as fast as I could, but as I passed him I realised it was someone else in a similar jacket.
Never mind, I charged on to the top anyway and found them both already sitting down at a picnic table.