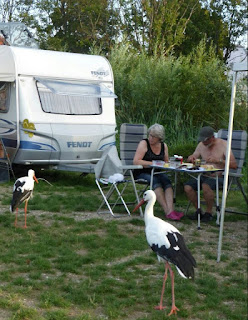 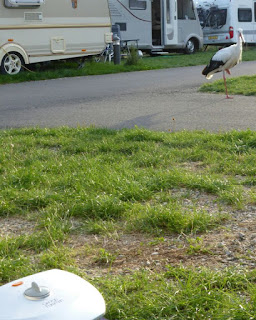 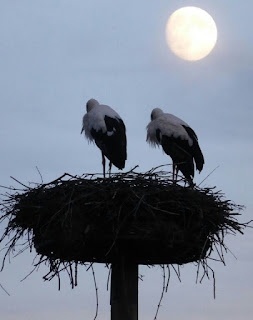 We have got used to storks zooming around just a couple of feet above the top of the caravans, and then using the little campsite roads as runways. They need a long take off and landing strip, and we are right next to the main road which seems to be their favourite.
Three of them were hanging around together this evening and two were interested in the people opposite who were having a quiet outdoor dinner.
As it was so hot I was grilling some sausages next to our van on the George Foreman grill, and the third stork was watching carefully from a few feet away. I had to stand in our doorway to keep a close eye on the bird as I didn't want it to get too close and burn it's beak.
Also, we only had six sausages and we were both really hungry - all this cycling gives a girl an appetite.
Picture three is of them back on their nest in the moonlight.
I am going to really miss them when we move on tomorrow.