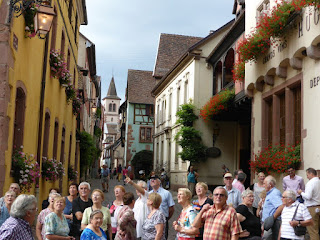 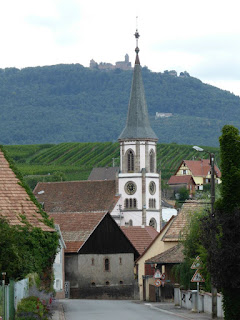 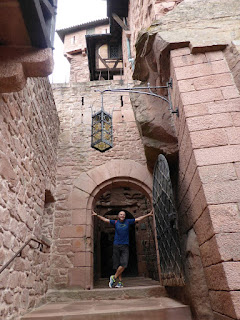 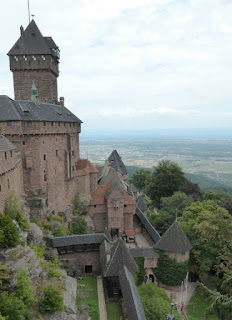 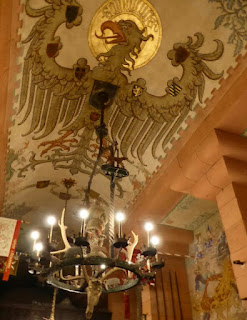 Excellent day today as we cycled to the Chateau de Haut - Koenigsbourg.
We headed along the Route des Vins (wine route) which took us on a hilly cycle through vineyards and villages. We stopped at one of the most famous, called Riquewihr, and it was full of tourists in the middle of guided tours.
That was the only busy village though, and we cycled through another half dozen sleepy places until we could see the Chateau on the horizon - pic 2.
Haut means 'high' in French and this place wasn't joking, as it was about 500 vertical metres above the surrounding valley.
Due to it's position, a Chateau was first built there in the 12th century and it was destroyed, rebuilt and destroyed again over the next 500 years.
It then stood empty for 250 years until the year 1900 when the area was part of Germany (it changed from French to German in 1870).
The Germans decided that they wanted to rebuild the Chateau as a museum, and they were just adding the finishing touches in 1918 - note the German eagle on the ceiling in pic 5.
The area was then given back to France after the First World War, and the Chateau was opened to the public.
That's a potted history of the place, so moving back to today.
We turned off the Route des Vins and headed uphill for eight kilometres, around lots of hairpin bends and through a forest.
I told Darren that I would meet him at the top, then swallowed a mouthful of sugary wiggly worms to give me an energy boost, set off peddling.
Unbelievablely, I made it to the top without stopping and Daz finished only a couple of minutes ahead.
I was really chuffed and put it all down to my new cycling kit.