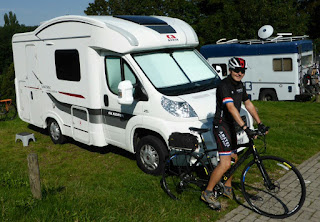 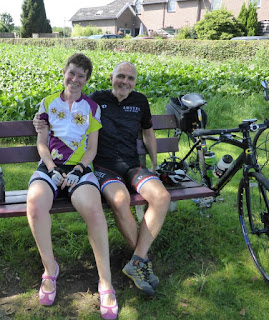 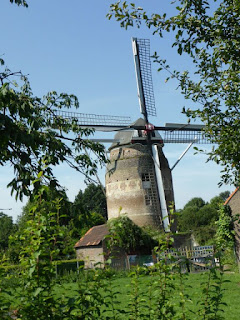 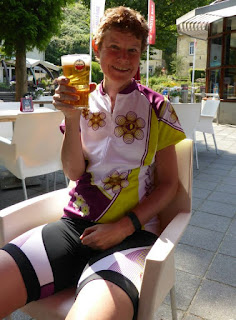 We didn't realise that we were right in the middle of the area that the cycle race called the Amstel Gold is held each April.
We found out all about it at an attraction called the Amstel Gold Experience,and got ourselves some free maps.
The real race is nearby 260 kms long and goes over the top of almost every hill in Holland. Thoughtfully, the race is made up of three loops that all pass by our front door.
You can choose from routes of 75, 79 and 113 k, or obviously the whole lot if you are either totally crazy or a top class athlete.
We opted for the 79 k route and set off on it this morning. At this point I should mention that we had a fantastic time yesterday at the local cycling shop which was full of end of season bargain outfits.
We eventually walked out with a new outfit each, and it is a first for me as I have never looked like a proper cyclist before.
I woke up early this morning, a bit like a child on Christmas morning and rushed to put on my new clothes. I did feel a bit of pressure as I didn't want to be an 'all the gear, no idea' type, but I was ready to go as fast as I could.
We started the ride and immediately hit the Cauberg hill, then cycled along the flat for a short distance, down a hill and then doubled back to go up another long slope. That was the story for the day as we twisted and turned around Valkenburg, looking for every incline.
We had believed in the myth that all of Holland is flat, but I can assure you that it isn't.
Picture two was our halfway stop and I think it shows how much effort I had already put in. I foolishly allowed myself to think that it would be easy once we had passed halfway and instead the roads got steeper.
Fortunately the last 15 k did calm down and we finished at the Amstel Gold Experience bar where they helpfully sell Amstel Gold.
If you haven't already guessed it is also known as the beer race.