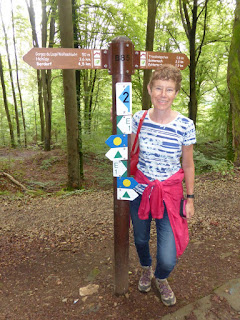 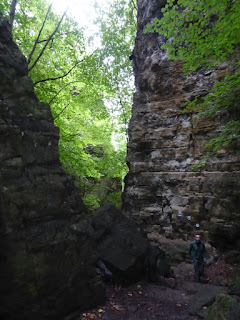 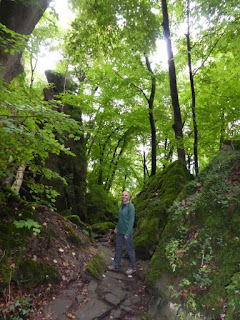 Darren has just been reading a book about a family who spent nine years planning their six months long trip around Europe. Now I am not saying that we are ever as forward thinking as them, but yesterday the weather forecast in Holland was for rain in the afternoon, so we decided to drive Luxembourg.
Unfortunately, it is only about 100 miles due south, and when we got here it also rained in the afternoon, and all evening.
We are in the northern part of Luxembourg and it is known as the Petite Suisse (Little Switzerland), I assume because of its hills.
This morning we took a walk from our campsite and followed the E1 path to Wolf Gorge.
I don't think I have ever been anywhere that is so well signposted - this example wouldn't look out of place at Lands End or John O'groats.
Wolf Gorge is exactly what it says, a large rocky gorge with stone steps and a footpath running through it.
Apparently, many years ago wolves used to hide out in it, and I can imagine that as it was a quiet and scary place.