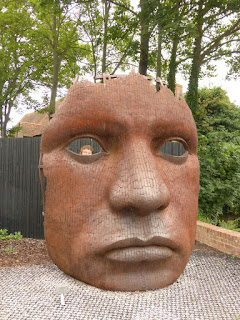 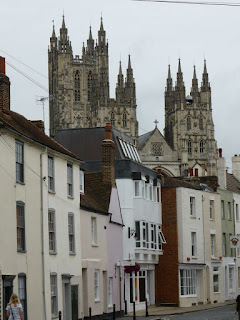 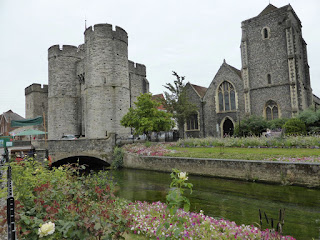 The weather has changed today, and after months of dry weather over here,  rain has arrived overnight. It cleared up over breakfast and we set off to explore more of Canterbury.
There is a beautiful, fast flowing river through the middle of the town, and alongside it is a huge metal face. By standing on tip toes I could just see through one of the eyes. I had wanted to look like a pupil, but unfortunately I am not tall enough, although hopefully you get the idea.
The Cathedral dominates the town and is crammed in amongst the shops and houses, although the city wall and gatehouses look pretty good too.
We went to an attraction called the 'Canterbury Tales' that told us a little about the book of the same name written by Geoffrey Chaucer. The attraction was definitely a bit childish, but we learned that it was the first book ever published in English.
It tells the story of some pilgrims who were heading to Canterbury to visit the Cathedral, and each pilgrim had to tell a tale. The prize for the best tale was dinner in a local pub in Canterbury! Not the most complicated plot ever, but some of the tales were pretty funny.