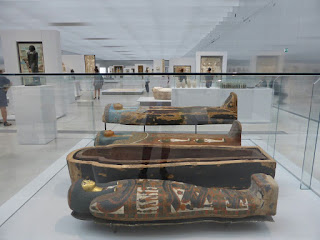 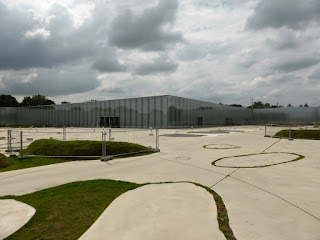 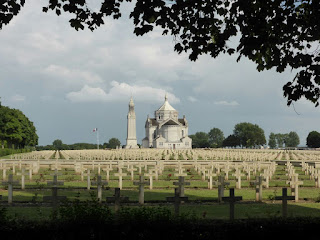 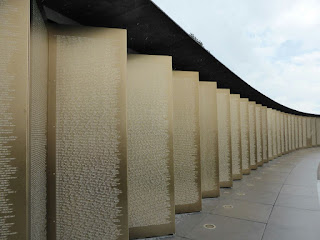 A quick update is due - we crossed the Channel on Thursday, and then drove about 100 kilometres south of Calais to a campsite near Arras.
On Friday we set off on our bikes along the lovely quiet roads to visit an offshoot of the famous Louvre gallery.
It is on the outskirts of Lens, which is an old mining town, and the gallery is on the site of a disused quarry.
It opened in 2012 and has top class exhibits ranging in age from 5,500 years old to less than 200.
I loved this beautiful Egyptian mummy that fitted inside a box and then in another box.
Outside it was a bit less successful as the industrial looking building was set in the middle of overgrown gardens, fenced off little mounds of soil and crazy paving with weird shapes cut out of it.
I was dying to get on and do a bit of pruning and lawn mowing, but sadly it wasn't possible.
We then cycled over to the Notre-Dame-de-Lorrete National Military Cemetery and the International Memorial.
We reached the Cemetery first where 40,051 French Soldiers are buried. It was built after the First World war, but also has soldiers from all of the French wars of the 20th century.
Finally, we went to the International Memorial which is also called the Ring of Remembrance. It is a 300 metre ring and the inside of it is filled with panels showing the names of 580,000 soldiers, nurses and other workers of all nationalities, who died in the local area during the First World war.