Cycling along a giant canal 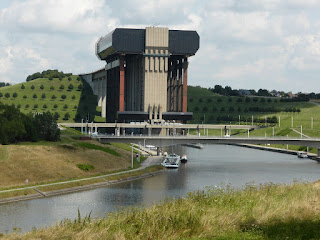 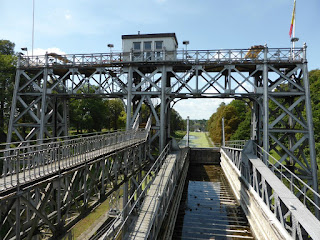 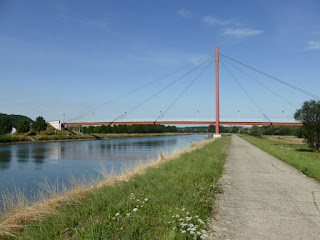 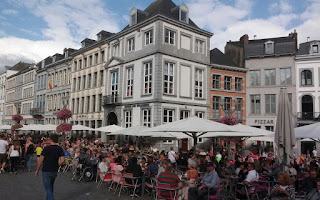 The sun was back today and we have a great cycling map of the area.
I wanted to cycle along the nearby Canal du Centre as I thought that it would be pretty, off road and easy cycling.
The first two reasons were very true, but there was some hills to climb as the canal locks here in Belgium are giant sized.
There is one new lock (picture one, yes honestly) and four old ones (see one of them in pic two).
They have even built two separate canals that run near to each other, and that is what made up our round trip.
The new locks take large barges 73.5 metres either up or down in one go. We weren't lucky enough to be on a boat so we had to cycle up sloping paths to get to the top. It was then flat all the way to where the canal splits in two.
For the return half of our ride it was all downhill, and we had to cycle around the four old locks that together move barges the same 73.5 metres in height.
I can see why the new lock was built, as it is much quicker to use, and it also takes much bigger barges.
It was all very interesting and complicated engineering.
Finally, this evening we got the chance to sit in the Grand Place in the sunshine with a Belgian beer in a fancy glass.