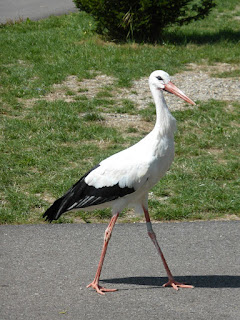 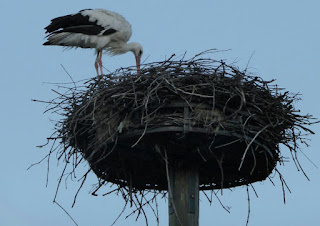 No, don't get too excited, there isn't a new baby in the house, as the stork hasn't paid us a visit. However, we are right in the middle of their territory so we are visiting them.
Keen readers of this blog will have noticed that I usually struggle with creatures, but I do have a few favourites. Along with donkeys, pandas and frogs, I have a real thing about storks.
Maybe it is because they are enormous, or that they nest on the top of roofs and chimney pots, but I think they are great.
One of the online comments about our new campsite said that the birds come down for lunch, but I thought that was only a rare treat.
However, we had only been here a few minutes when I looked out of the window, and a stork was walking right past our campervan.
Pic 3 is an animation of me trying to feed it bread, but the stork was not very impressed. I found out later that they are very partial to cooked pasta and I watched them catch it in mid air when thrown by other campers.
They are really tame and fly down for lunch and tea before eventually heading back to their nest in the early evening. One nest is on the top of a pole right next to our shower block, so they can keep an eye on us as much as we can watch them.