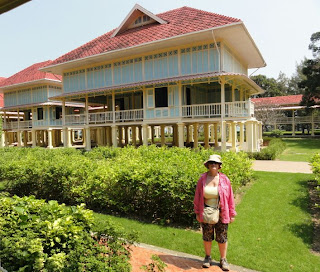 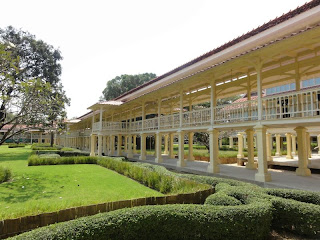 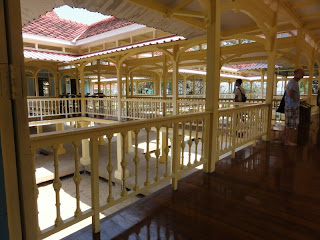 Caught a nice sedate bus this morning to see the Marukhathaiyawan Palace which is about 12k outside of Hua Hin. It stopped in what looked like the middle of nowhere and we walked towards an Army checkpoint. I had read it was inside a military base and I was very pleased when they let us in. There were a few other cars but no other walkers around and I think everyone was wondering what I was taking them to.
Actually, when we got there it was very good. The palace was built in 1923 by King Rama VI. Unfortunately, he visited for the first time in 1924 and then died in 1925. The next king did not use it and today it is open to the public. It is made of golden teak and all of the accommodation is on the first floor on stilts. Each member of the royal family had their own suite and they were joined together by endless corridors.
We were not allowed to take photos on the first floor, but I risked prison by taking one for the blog.