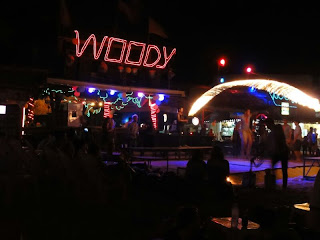 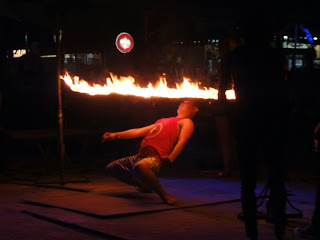 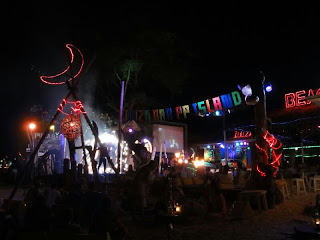 This is the beautiful beach near our guesthouse that I won't paddle in as the water looks polluted.
At night it is completely crazy and every evening there is fire dancing in about half a dozen huge open air bars that spill out on to the sand.
We walked past them in the daytime and saw the huge sound systems pointing out towards the beach, so hopefully the sound is funnelled away from the accommodation.
We wandered on to the beach at about 9.30 and it was already busy, but I am sure it won't reach its peak until well after midnight.
There were quite a few people spinning large poles that were lit at either end and throwing them up in the air then hopefully catching them.
Some of the bars then changed to fire skipping with flaming ropes and lots of the customers were joining in. There was also fire limbo dancing and one of the customers managed to set fire to the front of his shirt as he didn't dip low enough!
There are also lots of little shops selling drinks in buckets with straws so we are going to try this tomorrow and make a bit of a night of it.