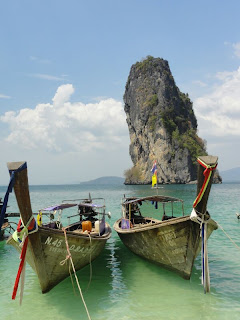 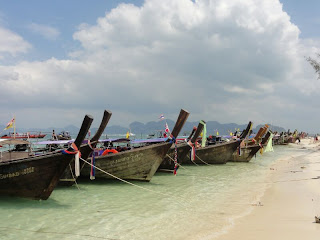 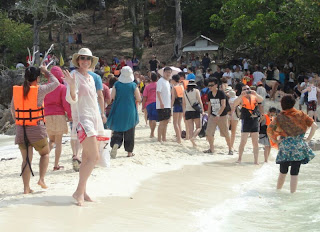 Didn't do a blog yesterday as we spent a few hours on a bus and then had a stressful time running around in the rain trying to find a hotel room in Ao Nang when almost everywhere was fully booked.
Today is a new day however, and we were on a daylong boat trip. Half of the tourists in Thailand were also on the same outing.
Daz and I came here last year and did exactly the same trip, but we did not realise that last time it was low season and the tide was out.
The best thing about our first port of call is that when the tide is low there is a strip of sand connecting three islands. We arrived today just as a young Japanese couple were walking in shoulder deep water across where the sand had been with their two frightened children trying to climb on to their heads. A small boat appeared to be in the process of trying to rescue them.
We landed and added to the large number of tourists on the rapidly shrinking remaining sand. Why did they bring us here first, we wondered, as the tide is high. Forty minutes later as we tried to climb back on to our boat in the now waist deep water, we realised that if they had brought us later there would have been no sand at all left.
Next stop was snorkeling with crowds of tourists, many of whom wore life jackets, mask and snorkel, but they never put their face in the water! They looked really funny bobbing up and down like corks.
Third stop was lunch at the beautiful island in my first picture. Our boat managed to barge in to a non existent gap, just like the way the buses do it on the roads.
Last stop was at Railay beach which is supposed to be one of the most beautiful beaches in the world. It was lovely but my camera battery ran out so sorry, no pictures.
I might have made this trip sound a bit dodgy, but actually it was excellent and totally different to last time.