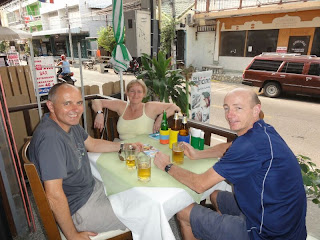 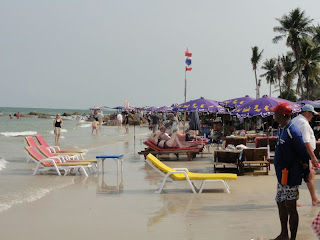 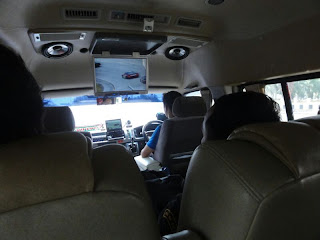 Travelled in a mini bus from Kanchanaburi to Hua Hin on the east coast. Margs and Dave were not with us as they had gone bird watching the previous day.
We were pleased as it was a direct bus from one place to the other. It was also modern and clean so we thought it would be an easy straightforward journey.
As soon as we set off it became obvious that our driver was fast and he started over taking everything in sight. I reached for my seat belt but it was cable tied shut so I could not use it.
The driver started multi tasking, answering his mobile with one hand, writing notes with the other and steering with his knees at high speed. Then he started looking through all of his cd's while undertaking along the hard shoulder. I stayed calm though as we shot between two lorries loaded with tree trunks and then overtook them both. Still stayed calm while he switched on a telephone screen so that we could sing Thai karaoke if we felt that way inclined.
He then stitched on a little tv screen on the dashboard and rifled through his dvd collection and found one with crazy American car chases on it. This meant that the passengers and driver could watch it on the screen and in real life simultaneously.
Getting really flustered now and holding on to the hand rail quite tightly with one hand. Fortunately the car racing stopped and it turned into the goriest film I have ever seen and at full volume too.
By now I was clinging to the handle with both hands with my blood pressure through the roof. Darren suggested closing his eyes and preying.
Obviously, we have made it here in one piece, the film ended in a massive lorry crash in to a coffee shop, and we are in a bar with Margs and Dave trying to calm down.
Hua Hin looks interesting, a bit like a sunny Blackpool.