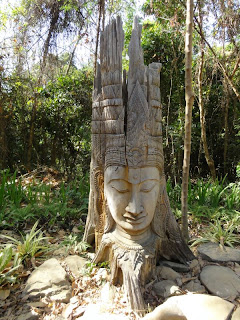 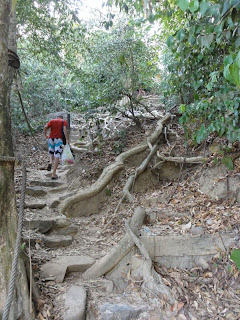 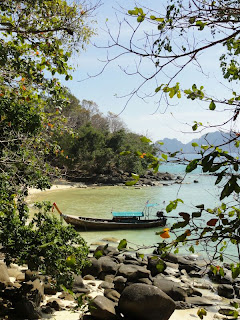 Margs and Dave caught a ferry this morning so me and Daz are on our own in Koh Phi Phi. We are planning on meeting up with them for one last evening in a few days time.
Left to our own devices we spent the morning watching Top Gear on Darren's tablet and then walked along a trail to Long Beach to do a bit of snorkeling.
We are getting quite a bit of exercise with all this trekking to the distant beaches, but I think the beach near to our guesthouse looks dirty so I won't even paddle in it.
Background info on Koh Phi Phi - the island has two mountainous areas and then there is a strip of land between the two that is about 200 metres wide, about 1kilometre long and only two metres above sea level. This area is completely crammed full of bars, restaurants, shops, tattoo shops, massage parlours and guesthouses.
When the tsunami hit in 2004 it completely devastated the low lying area and at least 2,000 people died. When it was starting to be rebuilt the intended idea was to limit the number of buildings and also impose a maximum number of tourists allowed to visit each year to cut down on pollution and the environmental impact, but that never happened.
Apparently it is even busier than before the tsunami, so there are problems, such as the dirty beach, etc. However, it is still (mostly) a very beautiful, if a bit crazy place.