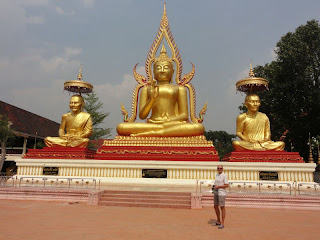 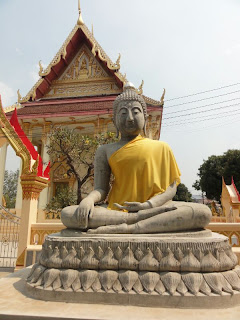 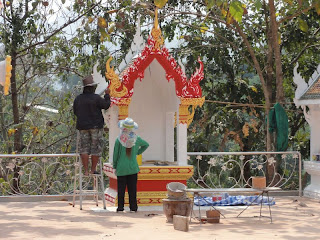 The friendly owner of our guesthouse (Dennis) suggested that we walk to the nearest village for lunch. He told Darren the directions so off we set. The details were to go along the main road and then turn left after something but Daz forgot what.
We turned left after a shop and were supposed to come to a crossroads and go straight on. Unfortunately, we found a T junction instead, but a nice farmer appeared and with the help of sign language told us to walk through his banana field and eventually we found the river. (Should have turned after a market)
Anyway, it was lovely and we went to see a temple that was being built to honour a famous local monk.
We thought that the gold colour on all of the monuments must be gold leaf, but actually the painters had a five litre pot of Trade Gold, or similar.
Also, the big Bhuddas were made of pre formed concrete and I think that they were waiting for their two coats.
Ps, the guesthouse where we are staying is brilliant and Dennis showed us a plaque that arrived yesterday as they had been voted the 25th best budget hotel in the world. They were beaten by one in Doncaster though!