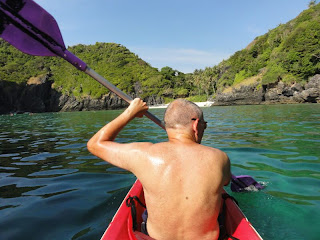 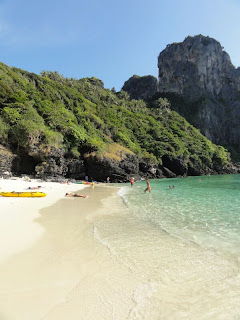 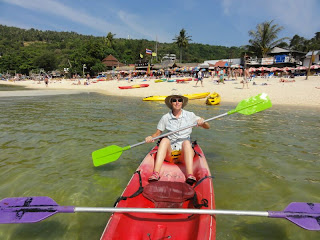 Decided to take drastic action today and kayak to a beach instead of relying on a boat trip. I had read someones blog who had also done this so I had a rough idea of where to go.
We set off straight out through the middle of the bay rather than sticking near to the shore. It was a bit frightening at times as the kayak wobbled alarmingly and we are very inexperienced paddlers. In fact the only time we have tried it before we zigged and zagged constantly and never managed to go in a straight line.
This time it was important to do better as we had a destination in mind and we hoped that a) we could paddle to it and b) that it would be nice when we got there.
After about 40 minutes we went round a large rock and there was a beautiful beach straight ahead of us. We felt like intrepid explorers as we dragged the canoe up the sand (or I did anyway, but then I am a bit over dramatic at times).
I am guessing we kayaked about 4 kilometres in total which seems a long way to me.