Snorkeling in the footsteps of Leonardo di Caprio 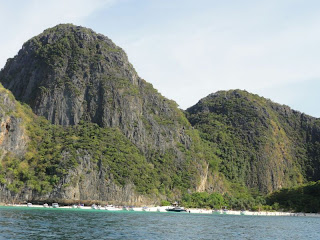 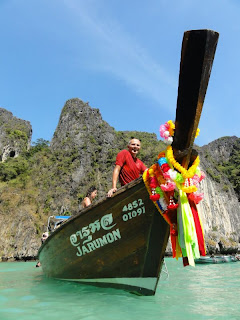 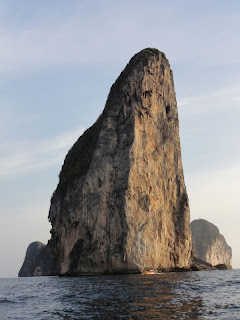 Took an afternoon boat trip around Phi Phi Lay island which is a small island just south of Phi Phi. It has a beautiful bay called Maya Bay which is where the movie called The Beach was filmed. (See first photo)
Usually the trips we go on are excellent, but this one was an exception. Todays captain didn't speak a word of English and he didn't have a helper with him, even though he had 18 tourists on board. He also had no interest in us and just wanted to get round as quickly as possible.
Our first stop was called Monkey Beach which was exactly what it said on the tin. We decided not to get off the boat as the monkeys were not scared of the tourists at all so they jumped up at people.
Our captain set off again and slowed down slightly as we passed a cave and he called out what sounded like 'Viking Boat'. No one could see a boat and I was surprised that the Vikings made it to Thailand.
We then stopped in a very pretty bay and had a swim off the boat. I think there may have once been coral and fish there but there certainly isn't now.
Maya Bay was also lovely to see and the snorkeling from the boat quite a way offshore was excellent, although the water at the surface had occasional bits of rubbish floating around.
We then landed on the beach and had to pay a National Park entrance fee to the captain. I hope he didn't just pocket it as we did not get any receipt.
All of the coral anywhere near the beach is dead and there is no sign of any fish and it would be interesting to hear what the National Park people spend their money on.
It is a lovely spot though and it is apparently controversial how the coral off the beach got damaged. I read on Wikipedia that when they were filming The Beach they decided to take out a lot of the beach vegetation and replace it with palm trees as they looked prettier. After filming ended they planted new vegetation and took the palm trees out. The following winter there was a storm and a lot of sand got washed on top of the coral and killed it as the root system of the new plants wasn't deep enough to hold it in place.
I also overhead a guide on the beach tell his group that the Thai government had put a load of extra sand on the beach to make it prettier and it had washed out on top of the coral, so I don't know which, if either, is correct.
In case you are wondering , apparently the tsunami did not damage the coral in the area.
Just trying to add a bit of gritty investigative journalism into my blog - Matt hope you appreciate it!