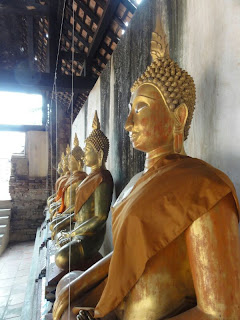 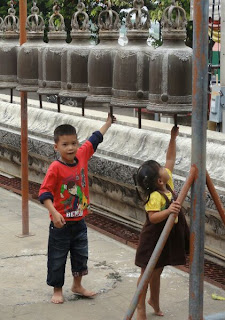 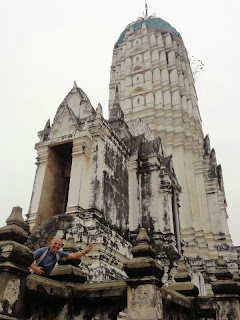 Ayutthaya town is on an island and is the meeting place of three rivers.
We caught a boat around most of it and included in the price was three stops at different historical sites. Unfortunately, due to lack of advance preparation and guide book, (we were not expecting stops) I cannot say what they were. However, a good time was had and it was very interesting.
The first stop was to see a large statue at a Chinese temple. It is almost Chinese New Year and it was very busy. We couldn't find the statue for ages as there were lots of buildings that it could have been hidden in and we were almost ready to give up, but then we found loads of pairs of shoes outside one building and there it was.
The same thing almost happened at the second temple as we didn't know what we were looking for.
I lost Daz for ages and he had found a reclining Buddha but I missed it completely. Good row of sitting Bhuddas.
The third place was a large temple that was a bit similar to Anghor Wat in Cambodia. It was in quite poor condition with some sort of repair work is being carried out, but very slowly I think.