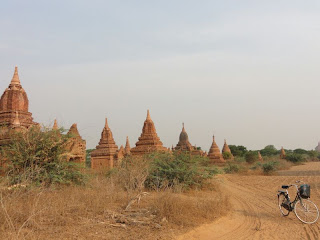 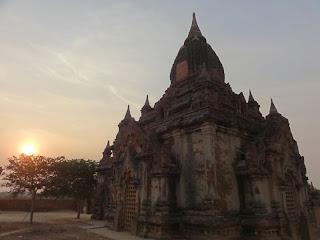 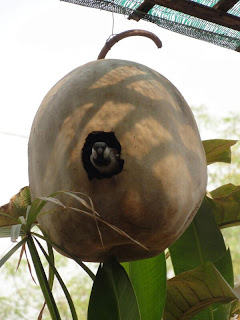 We caught an overnight bus from Yangon to Bagan. It used to be a really long and unpleasant journey, but a new dual carriageway has been built that goes straight up to Mandalay, but we branched off west to Bagan.
The bus was freezing and the aircon would not turn off. Everyone was angling the vents away from themselves and on to someone else! I tried to jam ours up with tissues and the locals in front made a complicated arrangement with the curtain where they pulled it over their vents and tucked it in to the overhead luggage rack. They pointed out their efforts to us and were pretty pleased with it.
I nodded off to sleep and once we turned off the main road I dreamed we were on a boat in a storm, but actually the bus was charging headlong and at high speed through all of the potholes.
Surprisingly, it stopped just before 3am and turfed everyone off. We were still dazed and half asleep when we climbed onto the back of a horse and cart and the driver dropped us about 200 yards away at our hotel.
The security guards didn't seem too surprised and we slept on the floor of the reception area until dawn. We were joined by other travellers through the rest of the night and it got quite crowded.
We hired bikes just after sunrise as we couldn't check in as the rooms were still occupied with guests who were on a more traditional timeline than ours.
It was quiet as we cycled along among some of the many pagodas. I got a bit loud though when some sort of bee thing landed in my hair and then stung my hand.
I could have done with a whisky to calm down, but there was none available so we stopped at a lovely little restaurant called 'Be nice to animals' for potato salad and Sprite for breakfast.
The whole restaurant catered as much for sparrows as for people and was full of little birds nesting in what I assume are gourds.