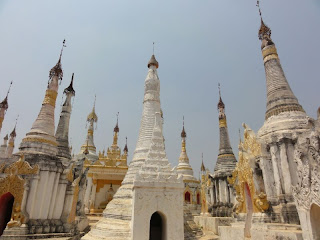 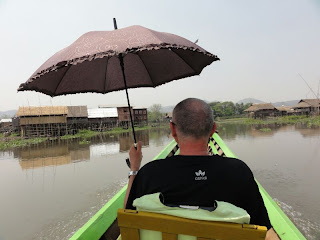 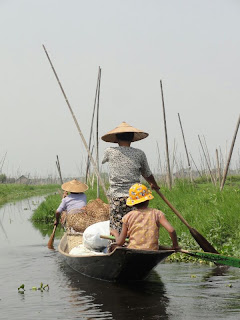 Our final day at Inle Lake and yet another boat trip with Soo Win. This time we cycled 12 kilometres to meet him at the village where he lives and had a quick look around the market. It got bit difficult at times as all of the stall roofs were too low so I had to walk at a constant stoop, and then there would be ropes across as well that were even lower.
The boat trip started well with us in the middle, Soo Win at the front and his brother in law at the back with the engine and propeller. We went down a sort of water street towards the open water of the lake and there are bamboo poles floating across the exit, maybe to act as a speed bump. The brother in law tried to take the pole too quickly and broke the propeller. Don't know what was said between them but they both had to get the oars out and paddle us back. We went past a group of men working on the roof of a house and they shouted 'bad driver' to us and they all burst out laughing.
Soo Win turned off into the village and paddled up to his house and we climbed up the wooden steps in to it. His wife and baby son were really shy but made us tea while at least half a dozen men, all sitting on their own canoes helped fix the boat. The whole of the village is built on stilts so there was no dry land anywhere. They even kept pigs in little raised pig sties.
Soon we were off again, this time with Soo Win driving and we motored down to the south end of the lake to see the pagodas at In Dein. They were up a long flight of steps and were deserted apart from two little old men selling candles and joss sticks to give to the Buddha. I bought a set, waited for ages while he blessed it and then popped it on a table where there were a few others.
Very hot day today, Daz caught the sun on the way back, even though he made use of the boat's umbrella. Once again enjoyed watching the busy activities on the water.
Cycled back to the hotel to wait for our bus, stopping off at a vineyard for a wine tasting. I even managed to buy some Cheddar cheese chopped into frilly slices to eat with it. I don't think there are many vineyards in Myanmar so this was a very lucky find. Wine not bad either.