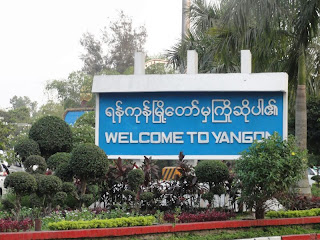 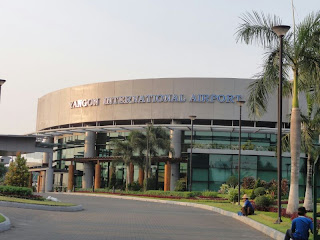 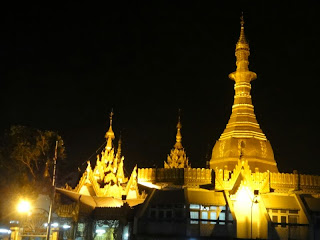 Had the most amazing time since arriving in Burma this afternoon.
The airport is really modern and fancy. As per the Lonely Planet on line instructions, we met another couple in the airport to share the cost of a taxi to Yangon (Rangoon).
They were a lovely young Russian couple who spoke excellent English (Tony and Cheri). Cheri put me to shame on the research department as she had already learnt at least ten Burmese words and had the bus number written down in Burmese script so that she could recognise it.
We decided to skip the taxi and all walk to the bus stop which ended up being about half a mile away. On the way Cheri kept stopping and asking locals the way and unbelievably the taxi drivers directed us to the bus stop.
It cost almost nothing into town and everyone was so friendly. I had a long conversation with a gentlemen who told me how Cliff Richard is extremely popular but he is very disappointed that the younger generation aren't so keen on Cliff as he is. He was also particularly keen on Englebert Humperdinck, and of course, Manchester United.
The bus was crammed solid and I got a seat while Darren shared the aisle with at least 10 women, none of whom were tall enough to reach the overhead rail so were flung all around the bus, screaming and laughing all the way.
Our hotel is right next to the Sule Pagoda which looks good lit up in the dark. By the time we arrived (a friendly lawyer from the bus walked us all the way from the bus stop and then just disappeared) it was dark so we have been out for a quick beer and are looking forward to seeing what it all looks like in the daylight.