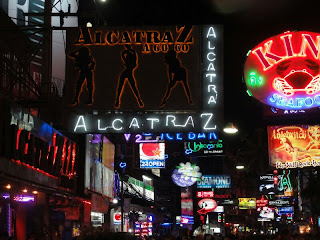 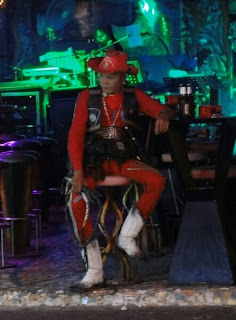 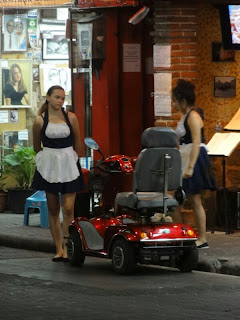 Caught an early flight this morning to Bangkok and then a bus on to Pattaya. We were originally intending to meet up with Susan and Paul for a couple of days in Bangkok, but due to an administrative error (naming no names) they flew out this morning exactly at the same time as we arrived!
We therefore had to change our plans and find somewhere close to Bangkok that we had not visited before where we could spend a couple of days.
Pattaya it is, in a little Russian owned hotel near the seafront.
We arrived this afternoon, waited for the temperature to cool down a little, then set off to to see the Walking Street. We found ourselves a nice spot in a bar and watched the world go by. At first it was pretty quiet livened up by huge groups of Korean (I think) tourists following their guides around.
Suddenly exactly opposite us we noticed a strange, quite frightening looking cowboy sitting still like a statue. One of the guides went over to him and he got up, cracked his whip a few times and did some magic tricks, mainly with cigarettes. They were pretty popular and he collected quite a bit of cash.
Just down the street the girls were struggling to get punters in to their bar. I don't think it helped that someone had parked their mobility scooter right outside.
By 9pm it was getting busy, the girls were out along the whole street and dodgy looking men were thrusting menus with strange items on them under our noses.
We managed to resist and headed slowly back to our hotel.