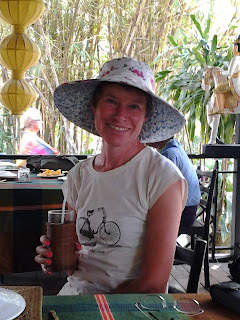 Another overnighter coming up as we couldn't find a day bus and we also don't have a hotel booked.
Darren was up early for a run around the nine kilometre block before it got too hot.
I hid a bit of a lazy start then out on the road.
We were trying to negotiate for a taxi to take us later to a nearby bridge that is supposed to be good at sunset and then on to our bus stop.
The taxi drivers outside the hotel seem to have a price cartel and aren't very friendly and on our walk another driver stopped to chat to us. Apparently he has just finished his maths degree and has lots of funny stories to tell us, so we are taking him instead. A bit worried how we are going to get out of the hotel and in to his car, without being chased down the street, but we will sort that out later.
Just spending a long lunch eating interesting salads and enjoying rather large rum sours.
Hoping that tonights bus arrives at a more suitable time tomorrow morning.