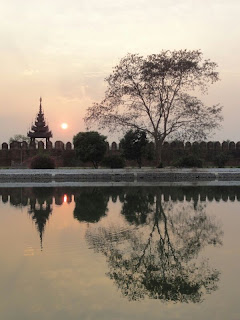 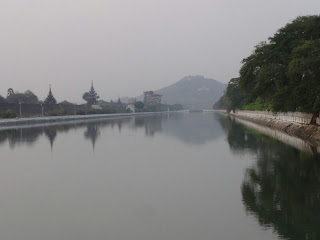 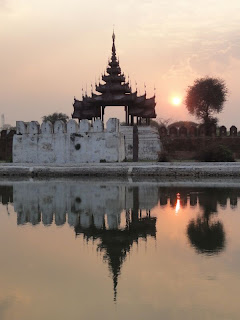 Caught the 8am bus from Bagan this morning. It was a very interesting journey that took about six hours. We passed through villages where they still use cows to plough fields, pull carts and to turn wheels to grind peanuts into flour.
It is the dry season at the moment and the road crossed dry riverbeds at high speed, stopping suddenly and loudly with frequent honks on the horn to pick up passengers at short notice.
We arrived at the bus station in Mandalay which also appeared to be doubling up as a rubbish tip.
After a bit of a good natured argument with a taxi driver as to how far it was to our hotel, we got in an unbelievably dusty car and set off for our hotel.
I booked the hotel in advance and chose one right next to a gigantic square surrounded by water in the centre of town that houses the Royal Palace.
It is about four kilometres square with a 700 metre wide moat all around it.
The Royal Palace is behind the ramparts, but I don't know if it takes up the whole area. It also says on Wikitravel that it was rebuilt in 1995 using forced labour so locals might prefer it if we did not visit it.
I will find out more tomorrow, but in the meantime, it is very beautiful at sunset.