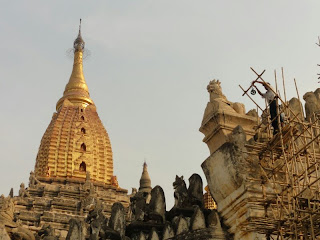 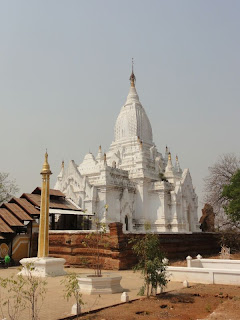 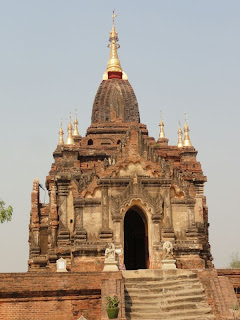 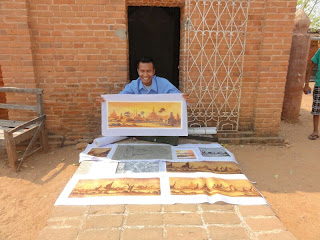 He of Grand Design fame would be shocked by some of the restoration going on in Bagan. Kevin loves to see buildings being restored with 'integrity', and faithfully using traditional techniques, etc, etc.
The UNESCO World Heritage people seem to agree with him as they will not make the area a World Heritage site as they say bits have been restored in an 'unhistoric' way.
Even I am a bit shocked that the workers just seem to be rebuilding and replacing broken bits with lots of concrete and brand new bricks. It does look a bit strange when a crumbling tower has a new concrete or gold twiddly bit on the top of it.
In the second photo we were drawn to it from a distance as it was white, but it has been painted with what looks like emulsion. Inside it there are some original 700 year old paintings, and right next to them are some really bright coloured poorly drawn pictures. What I liked best was that the artist had dripped paint splodges all down the wall and on to the stone base.
We stopped at the third pagoda which was deserted apart from a very nice man who told us all about the pagoda and then sold me a painting, even though I have no house to put it in.
Check out the terrible statues by the entrance to the pagoda. They have just been stuck together with concrete.