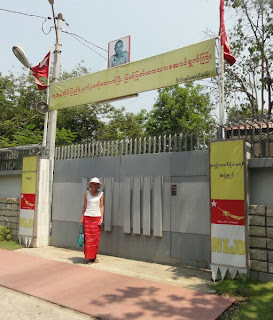 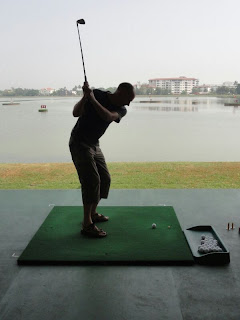 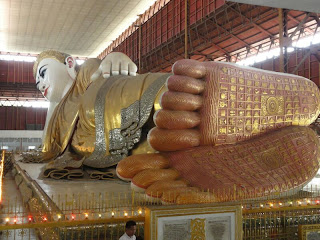 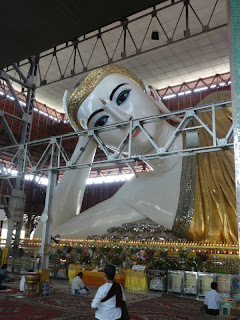 Our last full day in Myanmar today so we set off fairly early on the bus to Inya Lake which is about 10 kilometres north of our hotel. The lake is actually a reservoir that was built by the British in the 1880s, but is now very pretty with a walkway and topiary.
After enjoying a stroll we found a golf driving range where you hit the balls out in to the lake.
There were about 15 staff but only one other golfer and we hired a club, bought some balls and gave it a go. I can't believe how rubbish I was but Daz was pretty hot and the other golfer came over for a chat and to watch him drive. Pressure or what.
Afterwards we managed to find Aung Sang Suu Kyi's house, although it is not possible to visit - you just stand outside by the gate. It is not on any maps but we walked along University Avenue Road and recognised it from a photo on the Internet.
We then walked through quite a residential back street area and had a bit of fun waving to the locals. My longyi (skirt) didn't cause quite such a stir as it did in Mandalay, but amongst other encounters, we passed a bar where everyone waved and laughed really loudly, we met a gang of about six young monks who all giggled and smiled and an old lady who insisted on giving me a yellow rose!
Finally, we reached the massive reclining Buddha. He is about 66 metres long and lives in a sort of aircraft hanger. He has a lovely face and looks very happy. Lots of people were just sitting around on mats near him enjoying themselves.
His feet were particularly good as they had 108 distinguishing marks representing the three worlds. Sorry, can't explain it better than that.