Signing off from Bagan 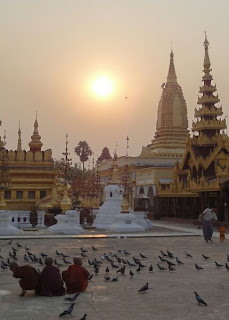 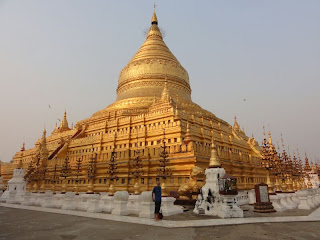 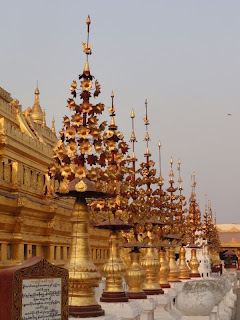 I thought I had finished for the day, but on our way out for dinner we decided to go to the pagoda opposite our hotel.
The setting was amazing as it had four enormous corridors that were about 100 metres long in each direction and they all led to a courtyard with a massive golden pagoda in it.
It was very intricate and ornate and the Shwedagon Pagoda that we saw in Yangon is apparently modelled on it.
It was almost sunset and there were quite a few young monks about feeding the pigeons with sweetcorn.
A lot of the locals were just sitting around having a nice time with their friends and one cheeky old lady called Darren over. She was smoking the biggest cigar I had ever seen.
She wanted him to pay to take a photo of her smoking it, which he did. He is posting it on his twitter account, so I won't show it here. Anyway, I shouldn't really encourage smoking or begging on this blog , even if it is by a naughty pensioner.