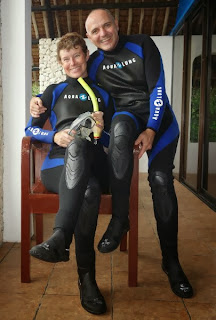 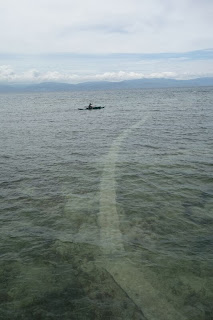 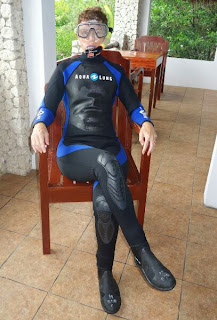 I never knew that snorkeling could be so difficult - or painful.
This morning we set off intrepidly out to sea along the handy underwater path in our swimming costumes, snorkels at the ready. We noticed a few little jellyfish floating around us and rather than risk getting stung, we turned around and headed back to shore to get advice from the on-site dive shop.
They recommended that we wear wetsuits, and a comedy half hour followed as we battled to put them on. Apparently it is easier if they are wet, so we floundered about in the swimming pool getting dressed.  We then put on booties as they also frightened me by warning us not to step on the spiny sea urchins.
The wetsuits were really hot and we had to waste even more time taking selfies and doing silly poses.
Eventually we were ready to brave the path for a second time, and we could see some jellyfish, but only our hands and heads were uncovered so it wasn't a problem.
At the end of the path brave Darren launched in to the water, and I was just ready to follow him when he made a commotion and swam straight back to the path.
The jellyfish had got him and he had two bright red patches on his forehead and a slash shaped mark from his lip to his chin.
Once more we marched back along the path and haven't been back since.
Ps, Darren said it feels as if he has had botox injections, so he should be looking ten years younger in tomorrows photos.