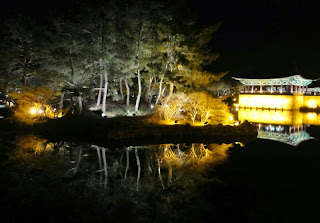 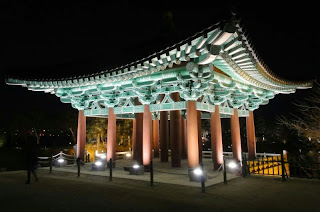 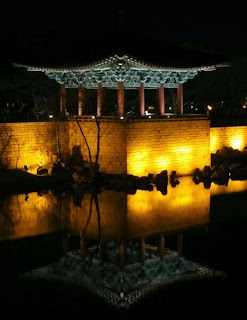 Today we caught a bus to the south east side of Korea to a town called Gyeongju.  We had a bit of a problem at the bus station as there are many places in Korea that start with Gyeong and sound very similar. We kept saying how we thought it was supposed to sound to the information lady, who kept repeating it back in a puzzled way.
Eventually I got my map out and showed her where we wanted to go. She looked really surprised and said 'ah Gyeongju', which to my untrained ear sounded just like we had said it to her, but obviously not.
It turns out that we had bought tickets for a luxury bus with lovely spacious reclining seats and footrests. We were not quite so lucky with food for the journey as we couldn't recognise anything edible in the bus station, so in the end I bought a packet of crisps that appeared to be sugar flavour, and Darren bought the most horrible tasting drink in the whole world. Never mind, you can't get lucky every time.
We know very little about Gyeongju so far, as we arrived late in the afternoon, but TripAdvisor said that we must go to Anapji Pond in the dark, so we did.
It was beautifully lit, although again to the untrained eye, quite similar to the Palaces in Seoul.
The trees were pretty spectacular though.