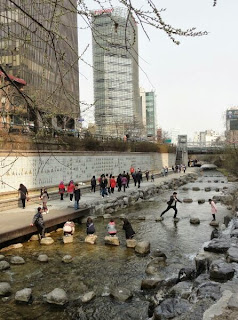 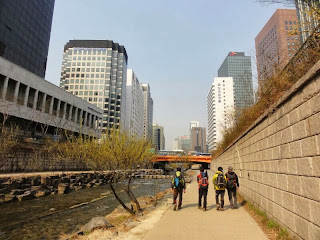 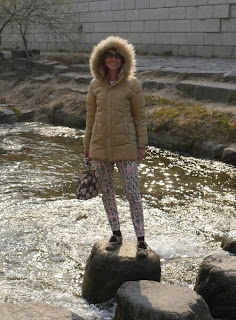 Today we discovered Cheonggyecheon stream in central Seoul.
It is magic because it starts suddenly and mysteriously at a beautiful waterfall near the City Hall.  It flows for 8.4k down a beautiful man made waterway, right through the middle of the city, and ends up at the Hangang river.
All along it are stepping stones, little areas to sit, speakers and lights, and thousands of people enjoying themselves.
The stream was created in 2005 on the route of an ancient river that was buried in concrete pipes during the industrialisation of Seoul. Water is now piped from the main river to the start of the stream, and its flow is regulated to ensure it always looks perfect.
It was a major undertaking involving over 20 bridges, and it cost a fortune, but apparently, is now well loved by the Koreans.
Fantastic.

Ps, we had a problem with the cold weather a couple of days ago, so we solved it by buying two lovely puffa coats at an end of season knock down price.
Pps, We now have a nice new problem - it is much warmer now so it is a bit too hot to wear them.
Ppps, don't think I will need to wear socks and sandals tomorrow.