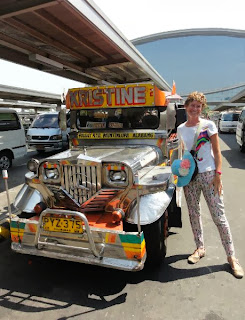 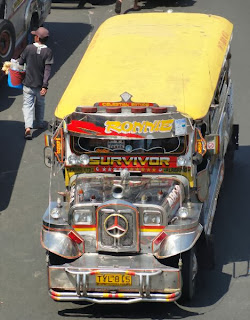 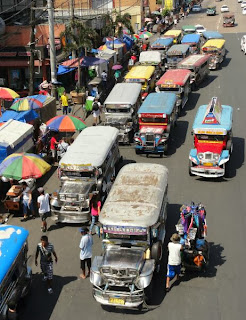 Jeepneys are only found in the Philippines and they were originally made from trucks left behind by the Americans after the war.
Today there are thousands of them everywhere and they are all proudly decorated by their owners.
They are actually open sided buses and we found one called Kristine, which was close enough for me.
They all go on set routes and unfortunately, Kristine wasn't heading our way, so we hopped on to Juicy Fruits instead.
They are very uncomfortable as there are wooden bench seats facing each other and for a fairly tall person, the roof is low. We have noticed that most Filipinos are very short, so they wouldn't struggle so much, and it meant that they could see out of the open sides, whereas I had no chance.
(In a supermarket yesterday we saw customers volunteering to be weighed and measured to check their bmi, and the maximum that the tape measure went to was 6 feet, which I thought was telling.)
It cost about 10 pence for the journey and the driver never sets off until it is completely full, and then they cram a few more in just to be sure.
I think we may end up catching quite a few of them over the next three weeks, so I will have to practice bending double and marching very quickly.
It was also a surprise today when I jumped off the  back at our destination and then suddenly realised that I was three lanes of traffic away from the pavement.