Swimming with the whale sharks 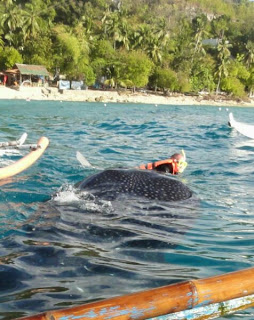 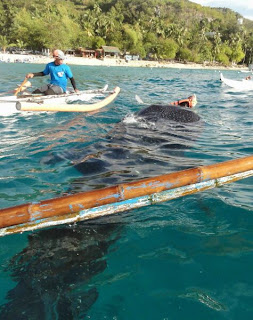 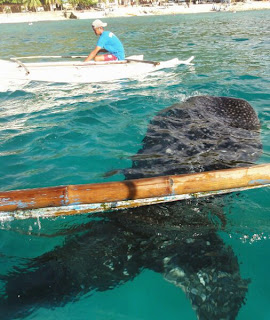 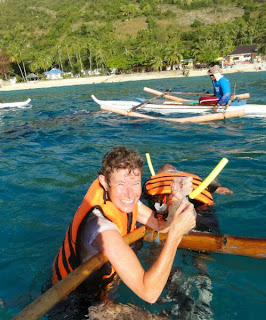 Don't panic - Darren survived this encounter without a scratch today! Fortunately I am not going to blog that he was eaten alive.
Yet again up before the larks to catch a public bus (driven by a nutter by the way) to Oslob, which is where the whale sharks gather.
Apparently, it is not very environmentally friendly as although they are totally wild, the locals tempt them to near the shore by feeding them mashed up prawns.
What I don't quite understand is how such a giant creature is tempted by such a tiny amount of food - I am surprised that they could even tell that they were eating it.
We arrived just after 7am and got straight into a little boat with bamboo stabilisers and oarsmen at the front and back. They rowed us out right next to a guy in his own canoe who was throwing shrimps out into the water.
'Our' whaleshark swam around him and our boat for the whole half an hour that we were allowed to spend on the water. As always Darren jumped in first and was straight into the action.
We were told that they can grow up to 10 metres long and their mouths can be 5 feet wide, and we think this one was about five or six metres long. While I was in our boat one fish/mammal was right next to me with his mouth wide open and water was pouring into it, just like a storm drain at the side of the road.
Darren was watching from under the water and he said that he could see the water shooting out from the side of its mouth after the food had been filtered inside.
We had a safety briefing beforehand that said not to go within four metres of them, but it was not possible to get away from the them. At one stage Daz was directly in front of it and although he tried to swim away, he ended up kicking it with his flippers.
It didn't seem to notice and just carried on circling and eating. We were also told that the whale sharks have their favourite feeders that they recognise and go to the same person each day, so we were probably just a minor nuisance to it.