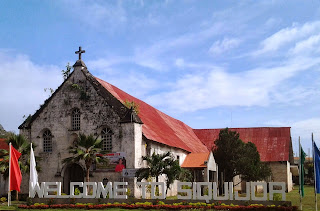 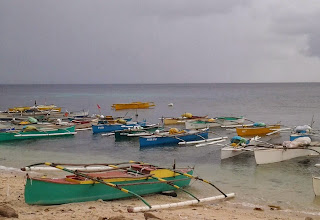 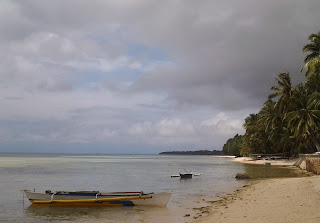 Traveling by ferry in the Philippines can be very frustrating, as we are finding out.
Today we got up early (we are now in Dumaguete) and walked down to the port to book our ferry daytrip.
We went last night to find out the ferry times and to book tickets  but we were told that we could not pre-book and to get there when the ticket office opened at 6.30am.
We decided to be a bit casual and arrived just after seven to find an enormous queue and no sign of the ticket office opening. About ten minutes later the staff turned up and gradually the queue went down. We paid less than £3 for two tickets for an hour long journey to Siquijor. We asked for return tickets to save queueing on the way back, but she said we had to buy them in Siquijor.
The ferry left about half an hour late and took an hour longer than expected, but we had arrived, and were ready to start our day trip to the island.
Siquijor is a little island with a good paved road around the coast. It has a few attractions - waterfalls, beaches and churches - scattered all around the island.
We decided to hire a moped and go right round, arriving back in time for the 5.30pm ferry. A guy offered us a modern little moped for hire for 350 pesos (just over £6) and we just needed to put some gas in it. To do this you go to one of the little roadside stores and buy a Coca Cola bottle which is filled with petrol and tip it in the tank.
We set off on the amazingly quiet roads, seeing more chickens and dogs than other traffic. Unfortunately, there were no roadsigns for any of the sights and almost all of the sideroads were rough and unpaved. We had no decent map and were not keen on setting off down unknown tracks so we missed most of the attractions.
Added to this, it started to rain and the sea, which was beautiful and blue when we arrived, turned dark grey and looked threatening.
We saw a couple of churches with rusted tin roofs, but this was only because we saw them from the main road. Therefore, we completed our tour of the island and got back to the port much earlier than expected.
We knew that there was an earlier ferry at 3.45 so we decided to catch that instead, so while I went to buy the tickets, Darren tried to find the motorbike guy to give him the key back.
He had not taken a deposit from us, or any identification but there was no sign of him for quite a while.
Eventually he turned up and as we walked to catch our early ferry I noticed that a handwritten sign was stuck on the window of the other ferry company. It said '5.30 ferry cancelled today'.
If we hadn't got back early we would have been stuck there overnight!