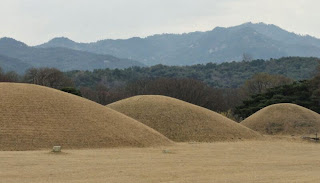 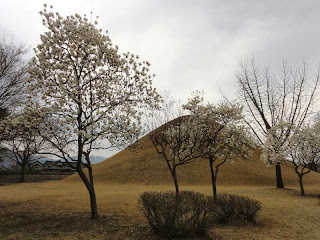 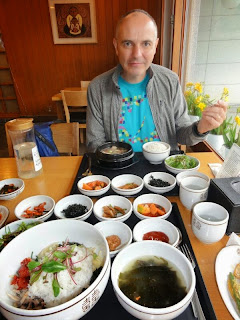 Right next to our motel are the Daereungwon Royal Tombs - in fact it is all we can see from our window as one of the mounds is taller than our motel.
There are 23 mounds each containing a king (I think), who was buried there.
At the moment they are still brown, and look much more like 'chocolate hills' than the original Chocolate Hills that we saw a couple of weeks ago in the Philippines.
We then stopped for lunch, and the number of dishes that it arrived in got a bit out of hand. It was also a bit of a mystery how to eat it. I got a large bowl of hot water with dark green veg floating in it. It didn't seem to be soup and I didn't know whether to rescue the veg and put it in the rice dish, or dunk things in it. In the end I ignored it as I didn't like it at all.
We both got large chunks of pickled something that I quite liked. It was a bit overwhelming eating them on their own (a bit similar to strong whole pickled onions) but I didn't know what else to do with them.
A jug of cold water arrived with tea bags floating in it that tasted like a similar, watered down version of the drink Darren bought yesterday for the bus ride. After a couple of minutes of eating the pickles and hot sauces I couldn't taste the water anyway, so it didn't really matter.
The staff kept appearing in the distance and smiling at us, so we are guessing that they were all coming to see what we were doing to their lovely food.
As Darren said 'it was more of an experience than a pleasure'.
Pizza would be easier, but also a cop out.