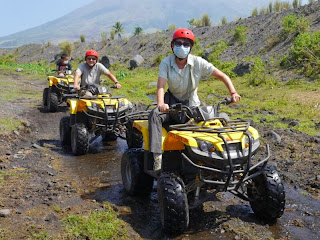 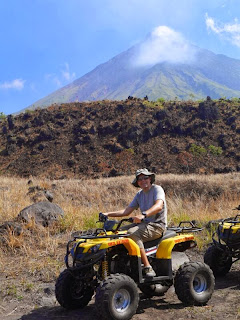 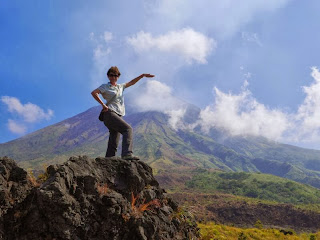 After our early start we went on a quad biking trip. When Darren told me about this, I immediately assumed that he would ride and I would sit on the back of his bike.
Unfortunately not, I got one of my own.
First of all we had a little lesson in how to use them near to some boys playing on a basketball court. My bike didn't turn like Darren's and I ended up trying to turn it on the court, then had to wait while the guide put it in reverse and pulled me away.
Next turn a parked car got in my way (Daz got neatly round it) so I had to reverse again.
Setting off down the street I was at the back and I found that steering and accelerating at the same time was very tricky.
I dawdled along behind and we then turned off on to a track which was really uneven and rocky. I was worried about damaging the bike so slowly went around the obstacles. When we came to a stopping point Darren told me that I was supposed to be driving quickly and bumping over everything.
I took this advice on board and we changed the order of the convoy, so that the guide was first, I went second with Daz at the back.
Wow  what a surprise!  I drove mine along then like a bucking bronco. I bounced over everything and accelerated quickly then let go of the accelerater and concentrated on steering, then accelerated, then steered etc, etc. I impressed Darren by going up on to two wheels at one stage and surprisingly, only one wheel when I misjudged a bump and nearly turned it over.
I couldn't steer it like the guide so ran over a small tree on one corner, got it stuck on another and then stalled it in a little stream.
Really good fun once I sort of got the hang of it.
We drove up to the end of the lava flow from the 1978 eruption - see what looks like a big wall in pic 2.
We got off and walked to the top off it and we were lucky enough to still be able to see the top of the volcano.
Ps, I think Darren will go with someone else if he ever does this again.