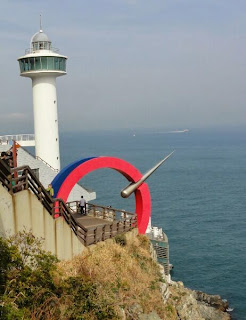 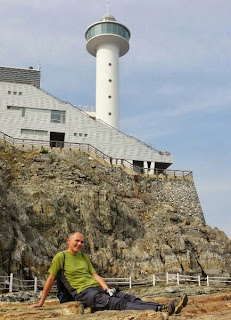 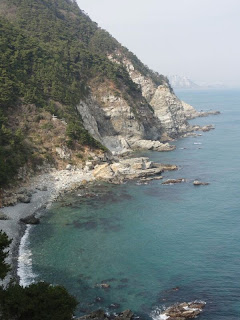 Arrived in Busan (southern Korea) this afternoon, and caught a bus to the Taejongdae area.
It was mild and sunny and there were dozens of tour buses filling the car park.
We walked along amongst the excitable and cheerful occupants of buses 55, 56 and 60. They were all wearing stickers with their number on and were supposed to be following their leaders who were waving large numbered signs, but they all seemed to have got jumbled up.
We left them to explore a pebble beach while we got an ice cream and carried on to the lighthouse.
Of course, we climbed up to the top, and then down on to the rocks. We found a rare English sign that said that the shoe sized hollows all around us were dinosaur footprints.
I don't know if it was a local legend, or even if it was true, but there was loads of them, so at one time it might have been the dinosaur equivalent of Piccadilly Circus.
Hope they enjoyed the view as it was pretty impressive.