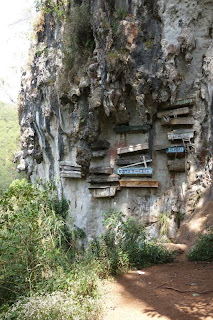 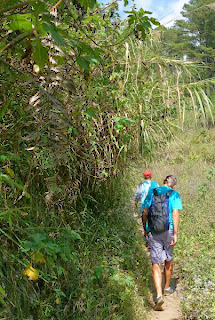 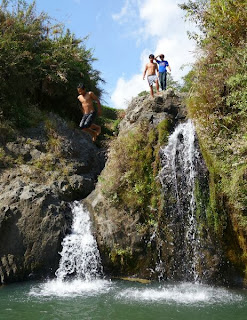 Well, that's not two words that you see next to each other very often. And no, we didn't travel for 17 hours to see them.
We are actually following a sort of circular route in the mountains north of Manila, and the coffins just happen to be here in Sagada.
Our guide explained that they belong to a religion called Animism, where they are very close to, and respect nature. They do not like the idea of being buried underground but prefer to be out in the air and sunshine. The latest coffin is from 2010 and nowadays, two metal posts are hammered in to the rock for the coffins to rest on. In the past they used to be pushed in to holes in the rocks that were high up the cliffs. Apparently, they had to be carried up bamboo scaffolding and were too heavy for one journey, so the coffin was taken up first, then the body followed a few days later.
We saw the coffins on the cliffs, and also a huge pile sitting in a dark cave, but I have spared you the pictures as it all seems a bit weird and grisly.
We also trekked to a waterfall, but at the moment it is the dry season, so it was bound to be an anti climax.
We had been thinking of having a quick swim but instead watched the local boys jumping from the top.